Easter is a Christian holiday, celebrating the resurrection of Jesus Christ. According to the New Testament Jesus died on Good Friday (also called Holy Friday, Black Friday, or Great Friday) and was resurrected three days later.

Spring Equinox was already celebrated in pre-Christian time. Equinox means that the tilt of the Earth’s axis is inclined neither away from nor towards the Sun, the Sun being vertically above a point on the Equator. The name “equinox” is derived from the Latin aequus (equal) and nox (night), because around the equinox, the night and day are equally long. Spring equinox happens around 19th to 21st March every year.

The Anglo-Saxon monk and Doctor of the Church Bede (672/673– 26. May 735), wrote that the word “Easter” derives from a Germanic goddess named “Eostra”. He wrote also that the April was dedicated to that goddess and called “ôstarmânôt” (in “De temporum ratione”), because celebrations in her honour were held in that month. It’s strange that the celebrations are held in April while Equinox is in March.

Einhard (775 – 14 March 840) wrote 830 in his “Vita Karoli Magni” of the Codex Vindobonensis 795, chap. 29, that Charlemagne was very interested in his mother tongue, the Franconian dialect of Proto-Germanic. Einhard wrote, that Charlemagne was translating the Latin names of the wind directions and the Latin names of the months into Franconian. He called e.g. the January “Wintermonth” (Wintarmanoth), the May “Pasturemonth” (Wunnimanoth) and the December “Holymonth” (Heilagmanoth). The new Franconian names of the months reflected happenings in the year, common activities and weather.

The Latin names of the months have been brought to the Germanic tribes with the Christianization. The Roman calendar called Julian calendar was formalized by Julius Caesar in 46 BC. The Saxons have been defeated by Charlemagne and Christianized around 800.

Jacob Grimm (1785 –1863), a German mythologist, came across Bede’s works and liked his explanation of the word “Easter”. He Germanized the name “Eostra” to “Ostara”. Bede is the only source for the existence of a goddess called Eostra and there is no source at all for a goddess called Ostara. That’s why it’s rather likely, that the word “Easter” derives from the wind direction “east”, (German: Osten, Proto-Germanic: ostan). The sun rises in the east.

The Anglo-Saxon tribes that went to England to annoy the Celtic tribes there, have been Germanic. That explains the similarity of the names of Easter in English and German.

I have been reading on Neo-paganistic webpages, that the existence of the prefix “east” in front of the name of some communes is a proof of the existence of the goddess Eostra. Sounds funny? Shouldn’t there be a goddess Southra, Westra and Nordra too? Well… there are no goddesses like that but there are some dwarves. Norðri, Suðri, Austri and Vestri are the dwarves that hold up the sky. They are mentioned in the Völuspá (chap. 11) and they symbolize the wind directions. One reason why Bede might have mixed things up was, that April was dedicated to Aphrodite (we’ll meet her again later) and he didn’t wanted the month to be named after any strange pagan god, he wanted it to be the month of Pascha, the “correct” name of Easter. It is likely, that April was dedicated to Aphrodite (though it was a Greek goddess, but Venus already had a day, Dies Veneris, Friday). The goddess is a dwarf, romantic depiction from the 19th century, licence: Public Domain

The Easter of the Eastern Orthodox Church and in all countries that celebrate it but don’t speak German or English is called “Pascha” (or something derived from this word). Pascha does not mean “east” it is the Latinized version of “Pesah” (Passover) and Pesah means “to pass by” and it’s the Jewish and Samaritan holiday commemorating the Hebrews escape from enslavement in Egypt. It takes a week and get’s celebrated in 2009 from the 9th – 16th April gefeiert.
According to the New Testament Jesus was crucified on Friday of the week of Passover.
Some elements of Passover are still included in some Christian Easterrites, especially the Easter Vigil (e.g. Eastercandle and Easterlamb). Though the Germanic tribes lived also in Scandinavian countries Easter is called “Påske” in Denmark and Norway and “Påsk” in Sweden, which is derived from the word “Pascha” and not from “east”.

Some of the German Easterrites remind of pagan solstice celebrations. For example the Easterfire, that is ignited many regions of Germany on Eastersaturday. And the Easterwheel, that rolls burning down the hills in northern Germany, the Harz mountains and in the Austrian Alps. The Easterwheel symbolizes the disc of the sun. In the German town Lügde the rite of the Easterwheel is documented since 784AD.

Pysanky are Ukrainian Eastereggs that were already crafted long before the Ukrainians were Christianized in 988. The traditional ornaments were partly changed, partly interpreted differently after the Christianization. In pre-Christian time the Pysanky were considered as magical instruments to ban evil spirits, to get a good harvest and to bring good luck.

Common ornaments on Pysanky are geometrical shapes, triangles that symbolized the elements and now the Trinity, diamonds that represent knowledge, and spirals that symbolize the mystery of life and death and immortality.
Dots symbolize stars and cuckoo’s eggs, which represent the spring.

In the 12th century eggs were blessed in the Eastermass (“benedictio ovorum”). They were meant to remind of Jesus resurrection. 1553 the first red eggs are documented on a Eastermess.
Eggs were not allowed during the period of fasting, they were watched upon as “liquid meat”. That’s why they were cooked, to preserve them. After the period of fasting people had lots of cooked eggs.

In the Old Testament psalm 104,18 of standardized german bible translation, the first translations mentioned “hares” because the Hebrew “šafan” (rock hyrax) was translated “lepusculus” (small hare), because there are no rock hyraxes north of the Mediterranean Sea.
The interpretion of this psalm saw the hare as a symbol of the weak man, who finds his shelter in the rock Jesus. It is mysterious though, how this would have led to the Easter Bunny.

It’s possibly indirectly Martin Luther’s (1483 – 1546) fault again. The Protestant urban bourgeoisie developped around 1700 the custom of the search for Easter eggs. That might have been related to the backlog of eggs due to the period of fasting of the Catholics. The Protestants ate the eggs and didn’t wanted to tell their children about Catholic rites, thus they invented the Easter hare who brings cooked eggs.

One of the animals connected with Aphrodite, the greek goddes of love, sex, and beauty, is the hare. Aphrodite was in the beginning a goddess of fertility, but that meaning changed. And the hare was not a symbol for fertility but for sex, just like the rabbit nowadays.

The origin of the Easter bunny is still a mystery. Should it have been an Easter rock hyrax? Should we mate on Easter like rabbits (I nearly said “hump”)? It’s indeed just as possible that the Protestants invented the Easter hare.

The high mountains belong to the wild goats; the crags are a refuge for the coneys.

a History of the months

One thought on “Reflections on Easter in Germany (and elsewhere)” 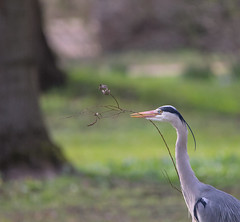