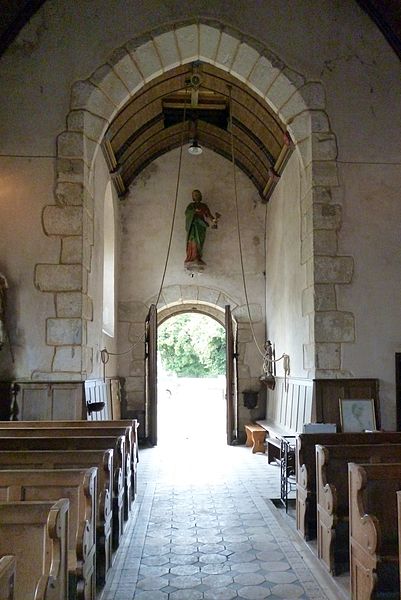 END_OF_DOCUMENT_TOKEN_TO_BE_REPLACED

Reconstruction of a Homo neanderthalensis at Landesmuseum für Vorgeschichte Sachsen-Anhalt in Halle, Germany. He seems to muse about the odd course of time. This file is licensed under the Creative Commons Attribution 3.0 Unported license.

When the railroad line from Évreux to Dreux was built in 1841 in Marcilly-sur-Eure, the workers found a skeleton in the area behind the castle Mésangère in a layer of red Middle Palaeolithic (300,000 to 30,000 years ago) alluvium. The workers threw the skull on a pile of rubble and it broke into pieces. Only the frontal bone was left. On reading this my first thought was: “oh no, how stupid of them. How could they treat the skull like that?” But then, they probably thought the bones were the remains of someone who had died in the Revolution. And it’s not really pleasant to dig up skulls anyways. I imagine now, a worker was digging up something, pulled it out of the mud, saw it’s a skull and squeaked while he dropped it. Whatever happened, all that was left was the front bone. They had neither radiocarbon dating nor DNA tests at the time. Somehow the front bone got in the hands of “experts”. I couldn’t find any hint, who were those experts. They were very excited and declared it was the front bone of a Neanderthal. The news was a sensation.

In the 20th century Dominique Gambier (*1947) the rector of the University of Rouen wanted to find out, if it was really the front bone of a Neanderthal. Alas, the original bone was lost, probably a cause of the Second World War (1939-1945). So they examined a copy that was stored in the Musée d’archéologie nationale in Saint-Germain-en-Laye. They found out that the bone looks rather robust but belonged to an European Early Modern Human. The layer of alluvium in which the skeleton was found had been too thin to allow an exact age determination. “Hey that’s not bad either”, says this European Early Modern man. Around 30,000 years ago, he might have been hanging around in Marcilly-sur-Eure. Forensic facial reconstruction by Cicero Moraes. This file is licensed under the Creative Commons Attribution-Share Alike 3.0 Unported license.

This wasn’t the only discovery in Marcilly, but it was the oldest. In the years 1976 and 1980 the archaeologists found traces of Bronze Age settlements (3200-600 BC) with the help of aerial archaeology. In 1967 a chariot burial site of the late La Tène culture (150–30 BC) was found. In 1982 more constructions of the late La Tène period were found, followed by an archaeological excavation in the two following years.

Archaeological sites of the Hallstatt culture (800–475 BC) and later in the département Eure were situated at the rivers Seine and Eure. The rivers were transportation routes. The river Eure in Marcilly-sur-Eure. Photograph by Félix Potuit. This work is in the public domain.

The Neanderthal of Marcilly-sur-Eure is licensed under a Creative Commons Attribution-ShareAlike 3.0 Unported License.

Serquigny was quite famous for its Gallo-Roman archaeological finds in the 19th century. They found mainly the rests of buildings and the historians hoped to find something more sensational, like the silver treasure in Berthouville. One day a historian by name of Lenormant decided to spend his holidays with his family in Serquigny. The place is beautiful, the Charentonne runs like a silver band through the town and on the southern side of the river the huge forest of Beaumont starts. It covers an area of 3580 hektars. When Monsieur Lenormant took a walk with his family, his wife stumbled over a small plaque, that had a name on it. “Baudulfus” was carved in the plaque of fired clay. Lenormant became excited. The holidays for his family were certainly over at that moment. He started to organize an archaeological excavation. He found a skeleton and lots of plaques with inscriptions. Lenormant published his research papers as the “Holidays of a historian” and gave them to several associations of “antiquaires” (that’s how historians were called in France at that time). Because of the inscription “Clovis, consul” on one of the plaques he thought he had found a Merovingian cemetery and a baptistery.

The historians in the departement Eure, and we had a lot around here. Were not that excited about his finds. It turned out, that the skeleton was around 150 years old and never saw a Merovingian. The baptistery was the rest of a limekiln. Now to the plaques.

Abbé Renaud Rouillon was an erudite and parson. He lived in Évreux and went to the library every day. He could read and write ancient Greek and Latin language. One day he started to travel around and leave plaques with fake inscriptions everywhere. To be found by archaeologists one day. This seed was harvested by Lenormant. Abbé Rouillon was in a mental institution at that time.

Lenormant didn’t believe the other historians. For him it was still a Merovingian cemetery. He lived by the motto: “moi seul, et c’est assez!” ‚I believe it, that’s enough!‘

The category of Serquigny on Wikimedia Commons.

serqwasser.jpg and serqcharent1.jpg by stanze is licensed under a Creative Commons Attribution-ShareAlike 3.0 Unported License.

The book “Histoire de la magie en France; depuis le commencement de la monarchie jusqu’à nos jours;” (‘History of magic in France; from the beginning of the monarchy until today’) by Jules Garinet (1797-1877), was published in 1818 in Paris by Foulon.

Tha Gauls had druids, that drove out demons and commanded over the spirits of the air. They spent their life with offerings to the gods, predicting the future and casting protective charms. On the sixth day of the celtic year they cut the sacred mistletoe while chanting “O Ghel an Heu” , ‘may the cereals grow’. In medieaevel times this expression had changed to “Au gui l’an neuf”, ‘to the mistletoe of the new year’. During this ceremony the whole tribe gathered around the oak on which the sacred mistletoe was growing. The freshly cut mistletoe was dipped in water, which was shared amoung the people. The water was considered curative and potent against malicious spells. The druids of Autun thought, that snake eggs are very sanative. Pomponius Mela wrote in the 1st century, that the druidesses on the Île-de-Sein were able to stop or call the storm.

It was custom to bury dead persons with their weapons, animals and slaves, that were supposed to protect the dead against demons. When the tribe was in danger, the Gauls sacrificed humans. They burnt people, that were said to have demonic powers, because the Gauls feared, that the sorcerers of their enemies could use those demonic powers to the advantage of the enemies. It was very difficult for the Romans that had conquered Gaul, to end this custom.

Many altars deep in the forests were dedicated to Toutatis. The area around the altars was sacred. Toutatis was a god of the netherworld and thus the people thought, that the area around the altars was full of ghosts, which could only be appeased by druids. If a Gaul stumbled and fell in such a sacred place, he had to get out immediately, but not on foot. He had to crawl out on his knees.

Jules Garinet (1797-1877) was advocate at the French court. He wrote multiple books and was head of the learned society “Société d’agriculture, commerce, sciences et arts du département de la Marne” for several years. He wrote the his History of magic in France (‘Histoire de la magie en France’) in 1818. He was born in Châlons-en-Champagne in the region Champagne-Ardenne. Nowadays a street in Châlons-en-Champagne bears his name. He collected books and paintings and his widow donated his collections (33000 books) to the city of Châlons together with a 16th century house, on condition of using the house as a museum. The Musée Garinet was opened in 1899 and it still exists.

Further reading:
The on the website of the French Ministère de la culture