Around 1060 William FitzOsbern, 1st Earl of Hereford, Lord of Breteuil (1011-1071) – companion of William the Conqueror (1028-1087) – included the church of Notre-Dame of Gouttières in the founding charter of Lyre Abbey in La Vieille-Lyre (Eure). The first church of Gouttières is said to have been built on the other side of the valley, though.

The nave was rebuilt in the first half of the 16th century, a vast chapel was then attached to the south of the nave and an inscription attests that the choir was restored in 1575. The church was provided with a set of stained-glass windows, one of which shows the name of the donors and the date of its construction in 1559. All the churches in the region have been restored after the Council of Trent in 1545. These measures were part of the Counter-Reformation.

This building consists of a nave, extended by a narrower choir, and a vast chapel acting as a transept arm to the south. An octagonal spire covered with slate is located at the entry side of the nave. The choir is the oldest part of the building and dates back to the 12th century. It is built in masonry of rubble stones of flint, limestone and grison (a grey bog iron found in wet plains in the natural region Perche) embedded in mortar. This grison is embedded in the oldest wall of the church, the small part to the right.

A part of the south wall of the nave, in coated rubble masonry, retains a few limestone keystones in the lower part of the wall, corresponding to an older window or door probably closed with a limestone frame in the 16th century. The south chapel is the most homogeneous part of the building. Its window to the east looks like the windows in the nave, but the southern window is bigger and built in the style Flamboyant (late Gothic architecture).

I noticed now, that I never wrote a complete article about the Confrérie de charité. So let me quote myself:

The brotherhoods of charity were mainly responsible for (cheap) burials. That was before private undertakers were forced upon the population by law. That was not very nice of Napoleon I.

Members of the brotherhood used to carry or drag or half carry half drag the dead body out of the house. The corpse was fully dressed and there was straw in his pants to make them stiffer. The defunct was layed in the coffin in the church. The coffin was closed, a nice pall was put on the coffin and after some religious ceremonies the brotherhood carried the coffin out through the southern door of the church. This door was also called paradise-door because it led the soul into paradise. Very practical.

The book about medieval graffiti was written by Matthew Champion, it’s called “Medieval Graffiti” and has the ISBN 978-0-09-196041-4

I will write about the lost church of Pierre-Ronde another time. This building deserves an article. But today I want to concentrate on the litre funéraire. The first church on this place in Pierre-Ronde, which is now part of the municipality Mesnil-en-Ouche, was built in the 10th century (found out with radiocarbon dating) in Romanesque style. What’s left of the 10th century church are foundations and part of the nave. The church was rebuilt in the 15th century. The bell tower was made in the 15th century, but remade in 1716. The choir was rebuilt in 1746. In the 19th century the hamlet of Pierre-Ronde lost most of its inhabitants and the priest left. The church wasn’t in use any more and was sold in 1966. It was owned by different people until 1992. It was completely forgotten, and the interior was completely emptied. In 1992 somebody found the church (“Oh look, we got a church there”). And the town bought it back. Some sculpted stones of the 15th- and 16th century were found in 2016 in a shed of a private person. The church is being restored by an association of inhabitants of the town. The church was not far away from Beaumesnil castle. And it seems that the noble families were using the church at least in the 17th century. The church Saint-Nicolas in Beaumesnil was built in the 19th century.

In 1048 Roger married Adeline de Meulan (1014/1023-1081). Chronology lacks detail, but sources show more and more often a presence of Roger and his family on the territory of Beaumont after 1050. In 1066 Roger made a first donation to a religious establishment on the site of Beaumont. Around this time Roger started to call himself Roger de Beaumont, instead of Roger, son of Onfroy. It is possible that he built a first motte-and-bailey castle and founded the church Saint-Nicolas, as well as fortified the town of Beaumont. But the sources are rather vague. The only reason to assume the existence of an earlier church than the Collegiate Church of the Trinity, is the donation Roger made in 1066.

Onfroy, Roger and his brother Robert were close to the Duke William the Conqueror (1028-1087), and Roger helped the Duchess Matilda of Flanders (1031-1083) in conducting the duchy during the conquest of England (1066-1070). The duke gave Roger land. Land that used to belong to Bernay abbey. Not only as a reward for his services, but also to create a protective fortress against the rebellious house of Tosny.

The 1077 marriage between Raoul II of Tosny (1027-1102), seigneur of Conches-en-Ouche (Eure) and Isabelle de Montfort-sur-Risle (1057-1102) allowed the Tosnys to become Châtelains of Nogent-le-Roi in Eure-et-Loir (until around 1200). The family possessions of the Tosnys thus stretched as far as the border of the duchy of Normandy. What I don’t understand about this, is that at least one of the Tosnys was with William the Conqueror in England and got land there as a reward.

To mark his presence, Roger built a big fortified castle, and founded in 1070 a religious establishment: the collegiate Church of the Holy Trinity. That’s only 4 years on from his donation in 1066. And in my opinion it is possible, that somebody wrote 1070 instead of 1066 because 1070 is an even number. Roger built castle and church of course with the consent of the duke. Roger founded those buildings to show that he was the feudal lord, “seigneur”, of the place. The castle and the church were government institutions. The “castrum and collegiate” (build a castle and a church) is part of a strategy of administrative and military structuring set up by William the Conqueror and followed by his sons.

END_OF_DOCUMENT_TOKEN_TO_BE_REPLACED

Before the French Revolution there were 5 churches in Beaumont-le-Roger. Now there’s only one: Saint-Nicolas. It’s dedicated to Saint Nicholas.

In medieval times the church belonged first to the priory in Beaumont-le-Roger but later to the abbey of Le Bec-Hellouin.

The church was built in the 13th century. But there are only 3 columns left of that time. The three columns separate the nave from the southern side aisle. You see here the southern facade.

The outer walls and the tower were built in the 15th century.

The choir and the northern side aisle were reconstructed in the 16th century.

The left part, the nave, was there before the right part, the choir. So maybe they just didn’t need to make the nave bigger. They used to work on the churches to make them bigger or because parts were on the brink of collapsing. Beaumont-le-Roger used to have 5 churches. I know three of them. The priory had a church and there’s a building on the other side of the town center that must have been a church. I just didn’t take photos there yet. With 5 churches the reason for alteration of a building might have been rather a bad state of the building and not the need for more space for all the believers. There are many churches in the region on which you can see the different states of the building during the centuries. After WWII they restored the building to the former state. That is what they claim. So I have to guess, that this is the former state. My guess² is that the style was different in the 16th century. The left part is gothic flamboyant in my opinion, while the choir on the right shows the influence of the renaissance style.

The portal on the west side was built in the 17th century.

During the French Revolution (1789-1799) the church became a public building. All bells except one were melt down and everything that was made of metal was taken away to “defend the Republic”. The church was used for Republican celebrations and to store grain on market days.

In 1802 the church was opened for Roman-Catholic Mass again.

The church was damaged severely by bombs during WWII. Only the northern side and the bell tower stayed intact. Most of the interior was gone. The church was restored from 1951 to 1971 to its former state.

There are several historic windows on the northern side.

The church is open during the day. And a lot of people visit it, to pray, light candles or play the organ or listen to the organist.

I will add new photos below.

I just did some research and found this old postcard, taken before WWII and there the styles are also different, but the choir doesn’t look as big as it looks now.

And I found only one image online, to show the damages after WWII. The whole southern facade was gone.

All the photographs are of course made by me. Why the heck do I write in English? I comment my photographs on Flickr in English. I’m lazy. It’s far easier to copy my own “outpourings” than to write new ones.

The church of the Sacred Heart in Amiens (fr: Église du Sacré-Cœur d’Amiens) was built in 1890 in the romanesque revival style. It’s beautiful. Fun fact: the architect was supposed to build a small chapel but he got carried away and built a big church. 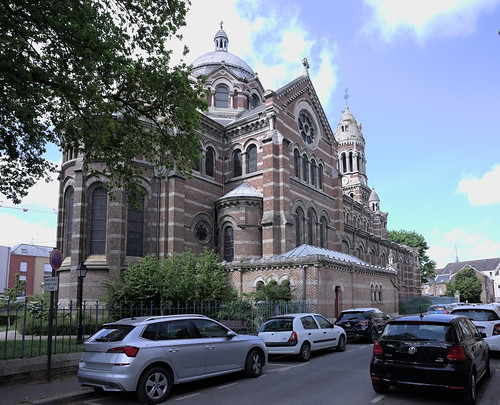 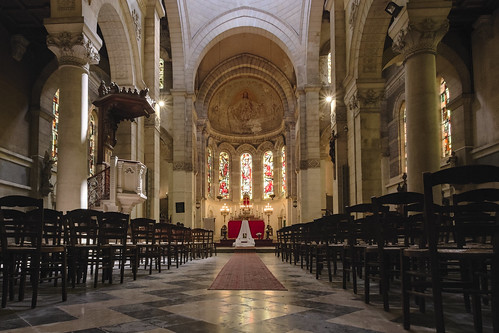 Side altar in the church Sacre-Cœur of Amiens. There’s a chair circle in the front, because there is a hole in the ground and the chairs are placed like this so nobody gets hurt. 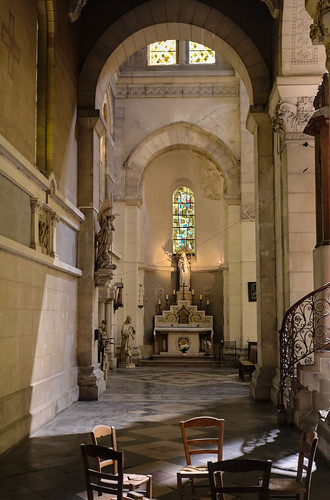 Portal of the church Sacré-Cœur of Amiens. Not bad for 19th century. 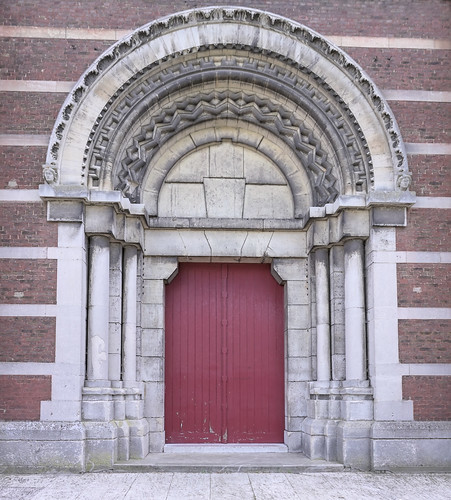 A beautiful ceiling. The yellowish light was like this and getting it neutral was kind of difficult. 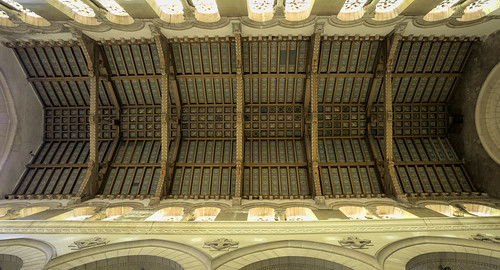 The other side aisle. 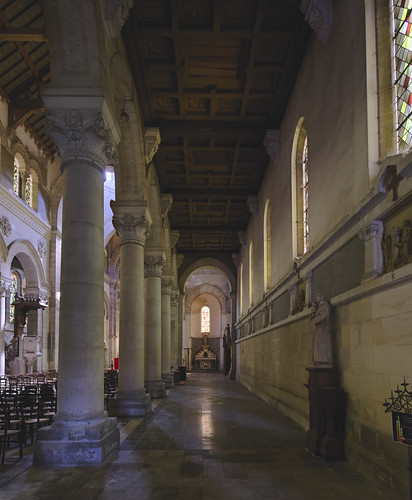 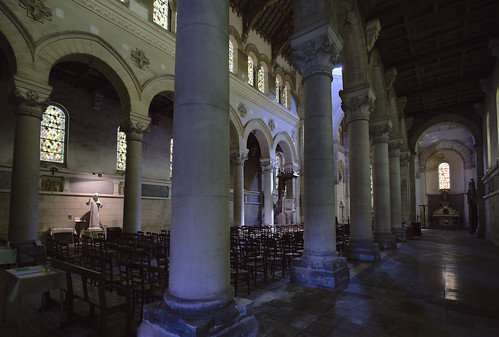 Pulpit of the church Sacre-Cœur in Amiens. Most likely 19th century like the church. Looks very good in mono, don’t you think? 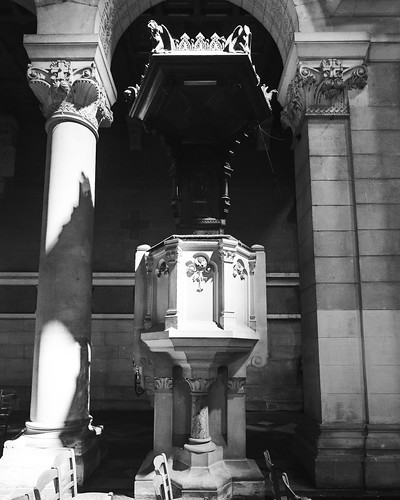 ” Voilà ce Cœur qui a tant aimé les hommes.” On the ceiling of the choir in the church Sacré-Cœur of Amiens is a huge mural by the artist Gustave Riquet (1866-1938). It was created in 1924. The sentence refers to the cult of the Sacred Heart and translates roughly to: “Behold the Heart that has so loved men”. I think in modern context that sounds wrong somehow but in the 19th century it was very popular. The mural looks awesome in the church. Very impressive and because of the degraded state it is in, it looks centuries older than 1924. 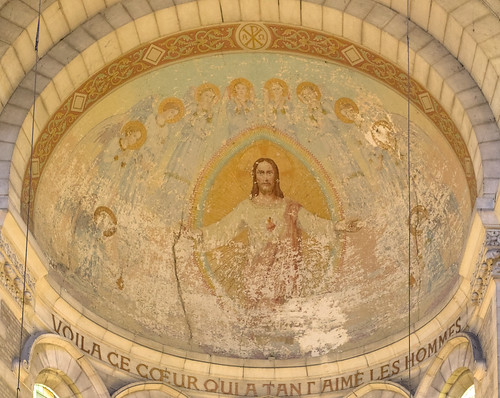 All the photos in this article were made by me and posted on Flickr beforehand.